As Sporting striker Andraz Sporar gets closer to completing his move to Middlesbrough, today we get two versions on how soon the transfer can be concluded.

The most exciting of them comes from newspaper A Bola, who writes that the striker is travelling to England today.

They say the agreement between the clubs was reached a while ago, and the tax issues he had in Portugal were sorted out on Wednesday. It’s claimed the striker spent a few days in Slovenia and now has his ‘bags packed’ for England.

Even though it’s been written by the English press that Sporar would be having passport issues to make the move from Portugal, A Bola learned that it’s not the case, since the problems between Sporting and the player were purely about money and taxes. 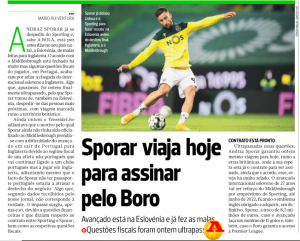 Meanwhile, in a more cautious story, O Jogo claims that Sporar currently waits for authorisation to fly to England.

It’s said the issues happened because Middlesbrough are only paying half of the player’s salary, which is €1m per season. The rest is being sorted with Sporting.

Sporar is set to join Boro on a one-year loan deal. There’s a buying option worth €8.5m which will be automatically triggered in case he scores 15 goals this season and the club are promoted to the Premier League.