If you’ve followed the transfer news surrounding Celtic in recent months, you’ll be fully aware that Milan are interested in Kristoffer Ajer.

The defender has been on their list for most of the last transfer window, but Neil Lennon’s side were reluctant to let him leave, meaning he’s staying at Parkhead for the time being.

That doesn’t mean Milan have given up, however, as two media outlets are reporting their interest is still alive.

We’ll first go with Tuttosport, who explain Milan’s eyes are still on Ajer, alongside other targets, which include Schalke 04’s Ozan Kabak.

But it’s MilanNews24 who appear to have the most information on this, explaining Ajer showed his quality during their last meeting in the Europa League, and the return leg ‘could be the occasion to restart the negotiations’. 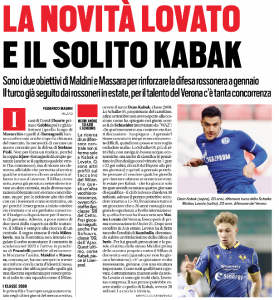 They add Paolo Maldini is ‘strongly interested’ in the Celtic player, but ‘isn’t willing to go on shopping sprees’.

The Scottish side have allegedly set an asking price of around €30m, ‘which can be filed down’, but any move ‘would still require an effort’ from the owners.

One way they could avoid that would be to sell either Matteo Musacchio or Leo Duarte, but if that doesn’t happen, there would be a need to go back-of-the-sofa diving to convince Celtic to let Ajer go.

This story appears far from over, so you’ve been warned.