Chelsea invested heavily in strengthening their squad for the 2022/21 season and Kai Havertz was the club’s most expensive signing of the last transfer window.

The Blues took the Germany international from Bayer Leverkusen in September, and he’s had a good start to his life at the London club, managing four goals and three assists in all competitions.

This week’s edition of SportBild includes an interview with the Chelsea summer signing.

Havertz is now the most expensive German player, but that’s not in his mind when he’s given opportunities by Frank Lampard.

“Well, that’s how the football market works. I can’t help it. So, I’m not over-evaluating this. I try to play football well. I don’t have my transfer fee on my mind when I go out onto the field,” he said.

Prior to joining the Premier League club, the ex-Bundesliga star was linked with European giants like Real Madrid, Barcelona, Bayern Munich and Liverpool.

When asked why he decided to join Chelsea over other clubs, he said: “It was important to me to have a club with a vision. An exciting change is taking place.

“We’re a young team with lots of great players. We think offensively. We want to build something up here and attack. That motivates me a lot. And then a title with Chelsea is worth a lot more.”

Havertz followed his compatriot Timo Werner to Stamford Bridge as the latter arrived at Chelsea from RB Leipzig. Having played together with the national team is helping duo at the Premier League club.

“I help Timo on the pitch with good passes… It is clear that we do a lot together. That also makes a lot of things easier,” he explained. 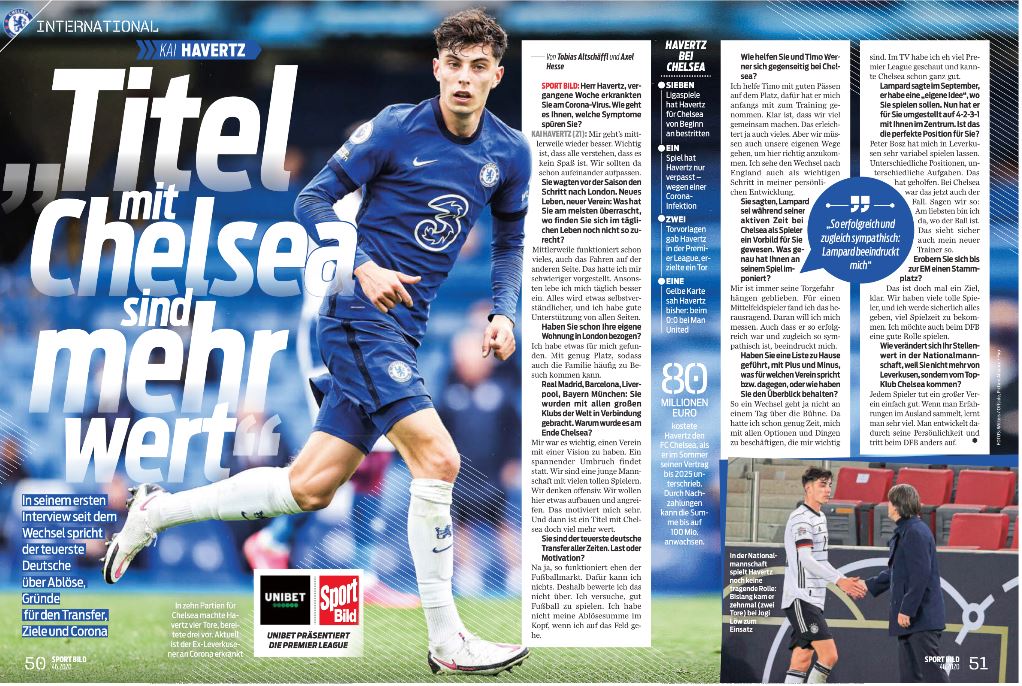 “However, we also have to go our own way to get things right. I also see the move to England as an important step in my personal development.”

The Chelsea player isn’t part of the Germany squad for the ongoing international break after he tested positive for Covid-19.

“I’m feeling better now. It’s important that everyone understands that it’s not fun. We should take care of each other,” Havertz stressed.