In mid March, Spanish newspaper AS reported Tottenham’s Daniel Levy had an ‘ingenious idea’ to loan Gareth Bale for next season and only pay a small part of his salary, with Real Madrid picking up the majority.

Marca also ran a similar story, and then this week the claims appeared in England wrapped up as a big exclusive.

Wednesday’s edition of Marca points out that it’s something they’ve been covering, and explains that of all the players Madrid want to see the back of this summer, Bale is the hardest to shift.

That’s because of his €17m (after tax) wages, which nobody wants to pay. A loan is ‘not ruled’ out and it’s made clear that Madrid could cave in to the Tottenham idea, if there’s no better options available. 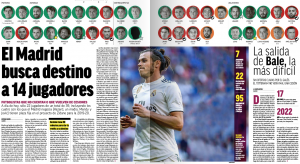 For a long time there’d been an assumption in Spain that Manchester United would turn up and plonk too much money on the table, but so far Ed Woodward hasn’t taken the bait.

Bale’s Madrid contract runs until 2022, so it’s not only next season which is a problem.

In total, the Spanish club want to see the back of 14 players, so it may be worth Spurs having a look at some of the others.