There are few chiefs of European football clubs so keen on the sound of their own voice as Karl-Heinz Rummenigge, especially when it comes to talking about Bayern Munich being all-powerful and turning down huge bids for their players.

Rummenigge talks about such things around once a month, and sometimes it’s been a weekly thing. In this week’s edition of German football magazine SportBild, Rummenigge has been speaking about a turning point in Bayern Munich’s recent history, and it involves Chelsea.

Chelsea’s offer for Franck Ribery has been talked about for years, and of course Rummenigge was happy to cover it once again.

SportBild remind the Bayern chief that Chelsea offered €65m plus Jose Boswinga for Ribery, to which he said: “The offer we had for Franck Ribery in 2008 was almost 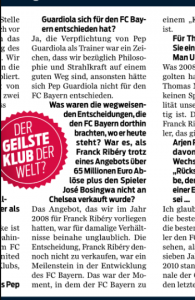 “The decision not to sell Franck Ribery nevertheless was a milestone in the development of FC Bayern. That was the moment when FC Bayern got to be a ‘buying club’.”

Ribery is still at Bayern and playing under Carlo Ancelotti, who had tried to sign him for Chelsea, according to the player himself. That would present some doubt over the timing of the bid, since Ancelotti only took over at Stamford Bridge in 2009.