Despite some denials coming from England over Manchester United interest in Bruno Fernandes, there’s still some hope in Portugal.

Although that hope hasn’t been as hyped as many believe, it does exist.

Monday’s edition of O Jogo mainly covers Tottenham interest and the club’s refusal to go higher than €60m, even when bonuses are taken into account.

Spurs are also working to sign Giovani Lo Celso and it appears they’ll go for whichever option gives them the best deal.

O Jogo say that at Sporting’s headquarters it’s believed Manchester United ‘will make an attack today’ to sign the player. It very much feels like now is the time, and if that offer, which agent Miguel Pinho has been trying to get for weeks, doesn’t turn up quickly then this one looks dead in the water. 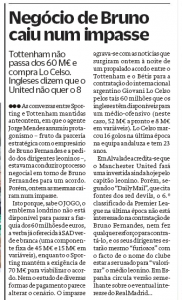 Jorge Mendes has been involved in this potential transfer since last week, and perhaps it would have been a better idea to get him in much earlier, with there being some suggestions in Portugal that Pinho has been out of his depth.