Zinedine Zidane made Manchester United’s Paul Pogba as a priority target for Real Madrid, but the latter have failed to fulfil their manager’s demand so far.

The Red Devils have made it clear they are unwilling to part ways with the World Cup winner.

After United’s 4-0 win over Chelsea, the midfielder stressed there was still “a question mark” over his future at Old Trafford.

Following his latest comments, there have been multiple reports in the British press around Pogba’s future and Mundo Deportivo have highlighted them in today’s edition of the newspaper.

At the end, they provide their own update on the situation. It’s claimed that Zidane continues to call for Pogba’s signing ‘as soon as possible’. 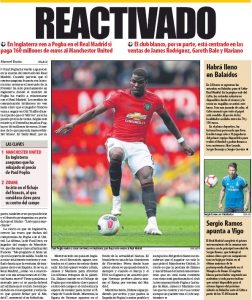 However, Real Madrid leaders believe it is ‘not worth’ meeting United’s demands for the player.

Zidane’s stance on Pogba makes it clear the manager is not happy after Real Madrid failed to sign Ole Gunnar Solskjaer’s star.

In addition to this, he is also unhappy after Real Madrid couldn’t offload the likes of Gareth Bale and James Rodriguez.