On June 24th, Everton forward Richarlison revealed he turned down an offer to join  Barcelona in the winter market.

The Brazil international made these claims to Canal Pilhado and explained talks with the La Liga winners.

However, the 23-year-old felt it was not the right time for him to leave Goodison Park midway through the season.

“Man, it came from Barcelona, right. Then it came, the club talked to me, I talked to the club too. So, we decided to stay here because we were in the middle of the competition and I also didn’t want to let my teammates down,” he said.

The former Watford man further stressed he consulted with the Merseyside club and they together decided to reject an approach made by Quique Setién’s side.

“It was mine with the club. I told the club I wanted to stay because I was happy here and also because it was like I said, it was halfway through the league, and it was going to be bad for me to leave, because I have a lot of joy here with the fans,” explained Richarlison.

Despite the South American categorically stating there was an approach from the Spanish champions, the Catalan club have dismissed the claims made by Carlo Ancelotti’s man.

Mundo Deportivo journalist Miguel Rico claims Barca ‘assure’ they didn’t have the Everton player in their list of targets for January, and he’s also not included in the summer list. In other words, they rule out making an approach earlier this year. 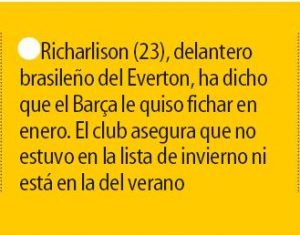 Barcelona were looking for a new striker in the winter market, following injury setbacks for Ousmane Dembélé and Luis Suárez.