The Egyptian winger has been linked with a return to the Turkish Super Lig, with Fenerbahce, Besiktas and Galatasaray said to be interested in his services.

Speaking to Radyospor, as covered by Turkish newspaper Fotomac, D’Avila said Trezeguet could leave if Aston Villa are relegated from the Premier League, and hinted Galatasaray may be an attractive destination: “We haven’t met with Galatasaray regarding Trezeguet. However, if Villa get relegated, then maybe we can talk.

“Villa’s situation will be the determining factor. There could be a loan offer if they get relegated. Galatasaray could be an option, an interesting one.” 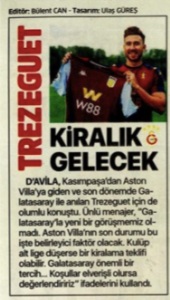 Yesterday we covered reports from Turkey that Fenerbahce are the latest club to show an interest in the Aston Villa man.

It was claimed Fener directors Emre Belozoglu and Selahattin Baki were looking at the player and could come in for him if the English side drop back down to the Championship.

The 25 year old has made 34 appearances in all competitions this season, scoring four goals. His contract at Villa Park will expire at the end of June 2023.