Newcastle United target Garry Rodrigues yesterday impressed yet again for Galatasaray despite his team’s defeat to Kasimpasa in the Turkish Super Lig.

Turkish newspaper Fotomac praised Rodrigues for his performance, and they’ve also given an update on Newcastle United’s interest in the Cape Verde international.

The Premier League side have been linked with the attacker since last summer, and have already had two bids rejected.

Fotomac say Newcastle United have been monitoring Rodrigues’ performances very carefully, and that the Galatasaray board are expecting a bid from the English club once the summer transfer window reopens. 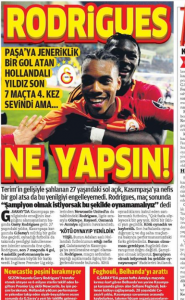 Newcastle United’s last offer for Rodrigues came in the winter transfer window, when it was reported they’d bid €9m.

Galatasaray rejected this bid from the Magpies, as they had done last summer when they’d offered just €6m.

It’s been suggested in the Turkish media Newcastle United would have to table a bid in the region of €15m to land Rodrigues, which was yesterday backed up by the player himself.