Sofiane Boufal had a reasonable season on loan at Celta Vigo and there’s been at least a little desire to get him back at the club, although not at the amounts which Southampton would want.

The 25 year old former Lille player was certainly entertaining in Spain, and topped even Lionel Messi for dribbling statistics, but he wasn’t consistent enough with an end product.

Now Nice are working to sign the player, and L’Equipe report a deal could be done before the end of the week.

The French club are in ‘advanced negotiations’ with Southampton, which it’s said could ‘very quickly result’ in a transfer for €10m.

That seems a little on the low side. 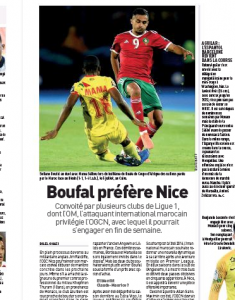 Boufal himself is said to be keen on the potential move, and he’d have to come to his own contractual agreement with Nice.

Bordeaux and Marseille have also been interested, although they were looking at loaning the player and keeping an option to buy for next summer.