After struggling in his debut season at Olympiacos, the Greek club allowed Björn Engels to join Reims on a season-long loan deal, where he went on to impress.

The French club made his transfer permanent earlier in March and his performance has drawn attention from Aston Villa.

Over the weekend, Reims released a joint statement from their CEO and president stating that they have promised the centre-back he could join a club from the Premier League, if there was a substantial offer.

Tuesday’s edition of Belgian newspaper Het Nieuwsblad claims the 24-year-old trades the Ligue 1 side for the Premier League new boys, where he already signed a five-year deal at Villa Park yesterday.

Dean Smith’s side will pay a transfer fee of around €10m to Reims to acquire the services of Engels. 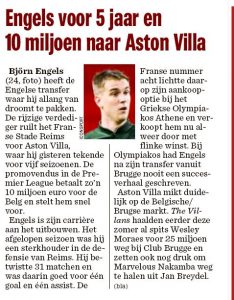 Engels is set to become the fourth new addition for Villa in the heart of the back four after the arrival of Ezri Konsa, Kortney Hause and Tyrone Mings.

The latter two initially joined Villa on a loan deal and their transfers were made permanent in the summer.