Home Europe Club ‘accelerate’ on Tottenham player as others see approach as ‘troublemaking rather...
SHARE

It’s no longer a question of whether or not Jan Vertonghen will leave Tottenham, but more of where will he go next?

That’s what the Italian media try and find an answer to on a daily basis, and the latest reports coming out of the country suggest Inter.

This was pushed by Corriere dello Sport on Monday, and now Il Messaggero suggest Beppe Marotta’s club have taken the lead, claiming they have ‘accelerated’ their efforts to acquire the Belgian, while AS Roma and their director of football Gianluca Petrachi, working on the loan renewal of Chris Smalling, have ‘let him go’ .

However, there are doubts as to Inter’s intentions in all of this, as La Nazione, through the outlet Quotidiano Sportivo, explain this sudden push for Vertonghen ‘could be interpreted as troublemaking rather than real interest’, as Inter want Federico Chiesa from Fiorentina, another club keen on the Tottenham centre-back. 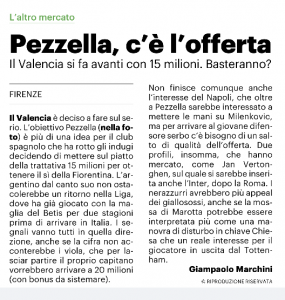 They feel that because Rocco Commisso’s club are both unwilling to lower their asking price for the winger and interested in the Belgium international, the Milan based club are trying to be a nuisance, on purpose.

It’s an interesting way of looking at things, and we’ll have to see who comes out on top, but it’s fair to say that looking at the Serie A table as it currently stands and the seasons the two clubs are having, few would begrudge Vertonghen for choosing Inter, if they really are interested, over a transfer to Florence.