The outlet brings a report saying the Lions are in a hurry to renew the 17-year-old’s contract, since they want to see him better protected.

Joelson’s current deal includes a release clause of €45m, but Sporting are so confident about his potential that they’d like to raise it to €100m.

This is said to be the biggest problem in the negotiations. The player’s staff believe this figure would put too much pressure on the teenager, and don’t want it to go over €80m. 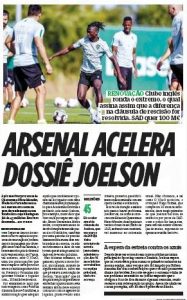 Meanwhile, Arsenal are said to be attentive to all of this. The Gunners reportedly used an emissary to find out more about the renewal.

That’s what made Sporting ‘accelerate’ the process. Since Joelson should have no problems accepting the new salary offered by the Lions, all they need to agree is this new release clause.