At the start of this month, we relayed news from Spain that Tottenham Hotspur are trying to sign Barcelona’s Clément Lenglet in the ongoing window.

Fast forward to Tuesday and both Mundo Deportivo and Sport have a report on Spurs and Marseille interest in the defender.

Mundo state the 27-year-old is aware he is not included in Xavi Hernández’s plans for the new season. Therefore, he could look for a move away from the Camp Nou, even though the centre-back’s deal runs until 2026.

Having refused to leave the La Liga side in January, the France international plans to meet his agent at the end of this week and assess all the offers he has on the table, before making a decision. 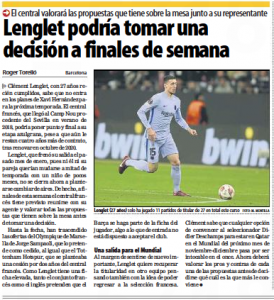 It’s claimed the former Sevilla man, to date, has received offers from Marseille and Tottenham.

The Ligue 1 side want him on a temporary deal, while Spurs are considering taking him via a two-year loan offer.

Lenglet’s current salary is deemed high by both Marseille and Antonio Conte’s side. Both of them want Barca to pay part of his wages, something they are not currently willing to accept.

A ‘confidential’ report from Sport says Lenglet’s exit operation has ‘somewhat stagnated’, but there may be ‘important news’ this week.

Xavi’s side want to save his entire salary.

The newspaper states the player has received an offer and may give his approval. However, they don’t specify which club made this offer.

Sport mention there’s been talks of Marseille interest in signing the Frenchman on a loan deal.

Spurs are mentioned and the report says they cannot take care of his full wages, but Conte’s side need a left-footed centre-back. Barcelona, down their end, are convinced he will ‘leave very soon’.

Both reports state Tottenham are in the picture, but there isn’t anything concrete to suggest a deal could take place soon.