Major League Soccer (MLS) will have a new franchise next year as David Beckham’s Inter Miami start their journey from March 2020.

Less than a week ago, reports in Spain indicated the former Manchester United star is keen on signing Barcelona’s Luis Suarez and is also trying to persuade his teammate Lionel Messi to join Miami.

The Argentine’s contract at the Camp Nou expires in 2021, but he can leave the La Liga winners as a free agent in 2020. During an interview with Sport, Messi refused to commit his long-term future to the Catalan club although made it very clear he’s happy and isn’t actively thinking about a move.

Over the weekend, a member of the British media reported Beckham’s top man Paul McDonough met Messi’s father and agent Jorge in London to discuss the potential transfer to the United States.

These claims have been picked up by various British outlets and also by today’s edition of Mundo Deportivo. The Catalan newspaper claims the forward’s surroundings have rubbished this report. 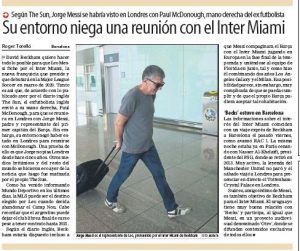 A further ‘proof’ that no meeting took place between McDonough and Jorge in London is that the latter has never put his foot on British soil for more than five years.

That should come as a relief for those at Barcelona, at least for the time being.