Dean Smith’s side are currently sitting in 19th place in the Premier League with eight games to go, and Sabah report if they get relegated, Galatasaray already have a deal in place with Trezeguet.

It’s reported AS Monaco want Henry Onyekuru to return so they can sell the Nigerian permanently this summer, and Gala have identified Trezeguet as his replacement.

The Turkish giants were linked with a move for the Egyptian when he was playing at Kasimpasa, but the 25 year old joined Aston Villa instead. 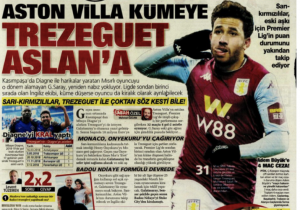 However, this summer, Sabah report Gala have a decent chance to ‘finally’ sign Trezeguet and the player is also reportedly keen to play for the Istanbul club.

Trezeguet has made 33 appearances for Villa in all competitions this season, scoring four goals and providing three assists. His contract with the club will expire at the end of June 2023.