Home Premier League Arsenal Claim Arsenal have made ‘official offer of €60-70m’ for player – ‘No...
SHARE

Late last week, there was a belief in Italy that Arsenal were readying a new bid for Dusan Vlahovic and it was going to be made.

That came from Calciomercato.it journalist Eleanora Trotta, who said €60m would be put forward for the striker, having been told as much by a source.

Well, if two reports over the past 24 hours or so are to be believed, Arsenal have opened their chequebook and made their intentions clear to Fiorentina.

Corriere della Sera on Sunday were the first to let people know, explaining that the Serie A side have made the decision to sell their star in January ‘if the right offer arrives’, before revealing that ‘the one from Arsenal, €60m plus the purchase of Lucas Torreira, valued at €15m, is particularly attractive’.

That would take the whole package to around €75m, all the while giving the Italians a player they already want to keep.

In his mind, though, the player wants to take Fiorentina into Europe with his goals before leaving in the summer through the front door. 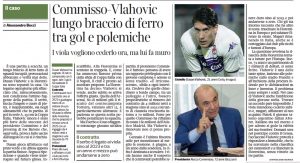 Doing so, however, would damage Fiorentina’s chances of maximising their income from a transfer, hence why they’re open to a sale now.

Fast forward to Monday, and La Stampa, relayed by Firenze Viola, explain that Rocco Commisso and Joe Barone were sent ‘into a rage’ following the decision from the player to not renew and wait even longer to be sold.

That’s because ‘there is no shortage of proposals, and in recent days, Arsenal have enlivened the market with an official offer of €60-70m’.

The problem for the Gunners is that ‘it will not be easy to convince the agents’, who still ‘demand very high figures for commissions’.

Time to maybe for Arsenal to open their chequebook a little bit further?