For the past few weeks, Daniele Rugani moving to Chelsea has been presented as almost a matter of time by the Italian media.

Juventus were happy to sell, Chelsea happy to buy, and the Italian international happy to get a big pay rise and team up again with Maurizio Sarri.

It all made some sense, Rugani has struggled for years to be prominent at Juventus and if another big club offer him the same elsewhere, and more money, this summer seems the right time to do it.

But that would all be too simple for Chelsea and Juventus transfer business.

Mattia Caldara has been dragged into the situation over the past few days, and now Tuttosport say the Blues have made an ‘interesting offer’ of €45/50m for the 24 year old defender.

This would create problems for AC Milan’s chances of getting Caldara themselves and sending Leonardo Bonucci back to the Serie A champions. 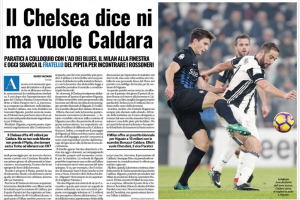 It could all be an elaborate ruse to trick Milan into valuing Caldara more highly in a potential swap, anything is possible given the soap opera around the Bonucci situation.

On Gonzalo Higuain, Chelsea have informed Juventus that things have gone cold, because a deal isn’t possible without the sale of Alvaro Morata. The Spanish striker has himself been linked with both Juve and Milan, making the situation even more complicated.