The AS Roma midfielder just can’t make up his mind whether to accept offers to move to the Premier League this summer.

Everton and Crystal Palace are the clubs named as having made those offers, and both have been involved this week in several Gonalons claims from the Italian media.

The Frenchman being perplexed has led to Roma being ‘paralysed’ in the transfer market, it’s all quite dramatic for Gazzetta.

Without knowing for sure what the midfielder wants to do, the Serie A side have to wait before moving for their own targets. Should Gonalons move to Everton or Crystal Palace then it’s stated Roma will have €50m to spend, with the midfielder valued at around €10m. 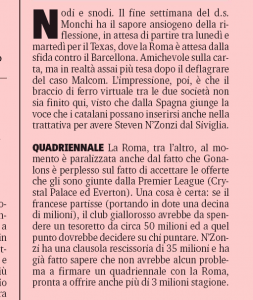 They could then target two or more players, with one of those potentially being Sevilla’s Steven N’Zonzi.

If Gazzetta are correct, then both the English clubs and Roma are simply waiting for Gonalons to make up his mind.

“There are opportunities for me” – Brighton player opens door for...

Man United ‘not ready to negotiate’ loan deal for player –...