With Max Allegri leaving Juventus, the Serie A champions need a new manager, and if they want to get a good transfer window under their belt, they could do with one relatively soon.

Mauricio Pochettino had been mentioned, but the main candidate for the job remains Maurizio Sarri, who led Chelsea to a Europa League trophy on Wednesday evening in Azerbaijan.

The former Napoli manager made it clear he wouldn’t be against staying at Stamford Bridge, openly stating he felt like he deserved to stay, but that has never stopped Roman Abramovich from moving things around in the past.

In fact, Gazzetta dello Sport on Friday report that Marina Granovskaia and Chelsea ‘will not stand in Sarri’s way’ if Juventus pay around €6-7m for his services. 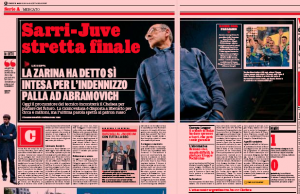 However, the final say, as it always does, belongs to the Russian oligarch, and if he gives the green light, a deal should be done relatively easily.

If he decides to keep Sarri around for next season, however, then Gazzetta explain ‘everything will become more complicated for Juventus’, who would then have to turn to other targets for their bench, with names like the aforementioned Pochettino and Jürgen Klopp mentioned.

However, if it came down to that, managers such as Simone Inzaghi and Sinisa Mihajlovic would make more sense.

For now, it seems all of Juventus’ eggs are in this one Sarri basket, waiting and hoping Abramovich doesn’t throw it straight out the window.

‘Landscape has changed’ at Huddersfield Town as ‘Bielsismo’ has ‘infected’ situation

‘Landscape has changed’ at Huddersfield Town as ‘Bielsismo’ has ‘infected’ situation