Home Europe Leicester City have agreed to loan player out next season, other transfer...
SHARE

Leicester City have agreed to loan Islam Slimani out for one more season, according to claims from the Portuguese press this Friday.

Newspaper O Jogo says the Foxes have a deal with Sporting so the striker can spend a year at his old club.

What is holding the deal back for now is the fact the Lions are struggling to sell Bas Dost, as their intention is to let him go this summer, opening a spot for Slimani’s return.

The Lions started by demanding €20m for the Dutch striker, but after seeing that clubs aren’t very interested in him, they are now happy to settle for half of that. 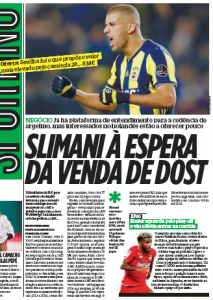 Although O Jogo reports the deal for Islam Slimani’s loan, they don’t say if Sporting will have an option to buy him at the end of the spell, which is actually very likely.

Signed from the Lions on a €30m deal in 2016, Slimani only spent a year and a half at Leicester City.

He was later unsuccessfully loaned to both Newcastle United and Fenerbahce, scoring five goals in 25 appearances this season for the latter of the two.