While the main football story this weekend was Liverpool beating Tottenham to lift the Champions League for the sixth time, Chelsea have had a fairly busy weekend of their own.

As was reported in the English press, Maurizio Sarri is edging ever closer to a move to Juventus, leaving the Blues in need of a replacement for next season.

Lifting the Europa League last Wednesday, winning his first ever trophy as a manager in the process, the former Napoli man has been given permission to move to Juventus by Chelsea, who allegedly refused to meet his sole condition to stay, which was to buy into his philosophy and publicly back him more.

This news quickly travelled to Italy on Monday and Corriere dello Sport give their side of the story. 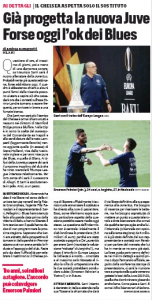 While much of the information remains the same, the Italian newspaper point out that Juventus might have to wait a little bit longer before announcing their capture of Sarri, as Chelsea want to announce whoever replaces him (the favourite appears to be Derby County’s Frank Lampard) before allowing their current manager to go.

Furthermore, there’s a chance no ‘fee’ could be paid, with the compensation potentially paid at a later date via adding a few extra million on a player transfer, with Emerson Palmieri suggested as the potential target.

There’s been no indication yet that acquiring Lampard from Derby is an easy task, with other names being mentioned around Europe, notably exiting Juventus manager Max Allegri.

So until that’s sorted, Corriere dello Sport seem to think the Sarri story will remain as it is: close but not complete.