Despite being well stocked in the department, and having multiple options out on loan, including Malang Sarr who was signed in the last window, Chelsea continue to be linked with central defenders.

Mohamed Simakan is one of those, and Saturday’s edition of L’Equipe brings their slant on the situation. The French newspaper states Frank Lampard’s side have ‘positioned themselves’ for the signing recently, but it’s also said the Blues are in ‘no rush’ over a potential deal for the Strasbourg player.

There’s also said to be other interest in England and Germany, although Chelsea is the only club named from either country. Over in Italy, Napoli and AC Milan are keen, with the latter being strongly linked with Simakan in recent months. 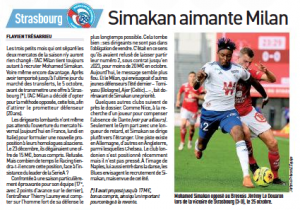 Chelsea are said to be looking towards the summer with regards to the defender, so they’d have to hope Milan don’t get a deal done in the winter market.

Any move to Stamford Bridge would then surely be dependent on other centre-backs leaving.