Emerson Palmieri is the first choice left-back at Chelsea, ahead of Marcos Alonso… with both linked with a move to Italy.

It was Maurizio Sarri who preferred the Brazil-born Italy international instead of Alonso in the second half of last season.

The former Napoli manager left the Blues for Juventus and has now set his sights on bringing the 25-year-old to the Turin club.

According to Tuttosport, Juve chief football officer Fabio Paratici has eyes on signing a new left-back in January as the Old Lady have Alex Sandro as the only recognised player in that position.

It’s claimed Emerson as a ‘solution’ to strengthen Juve’s defence would be appreciated by Sarri.

Any approach from the Serie A winners in signing the fullback will see them face an economic obstacle. The west London club are demanding €30m for Emerson. 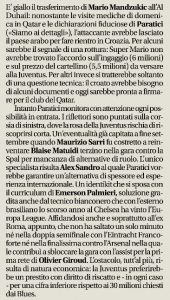 Paratici’s idea is to sign the player on a loan deal with right to redemption for less than €30m.

It remains to be seen if Chelsea would allow Emerson to leave and if they do, what fee would be needed to take him away from Stamford Bridge.