Red Bull Salzburg’s Erling Braut Haaland is being chased by clubs across Europe, including Manchester United.

Ole Gunnar Solskjaer coached the 19-year-old when the two were at Molde and the Red Devils manager confirmed his side’s interest in signing the striker last week.

RB Leipzig also want to acquire the Norway international’s services and their managing director, Oliver Mintzlaff admitted it’s not easy for his side to sign the goalscoring star because of competition from United, Borussia Dortmund and Juventus.

Mino Raiola is the player’s adviser and Tuttosport claims Juve chief Fabio Paratici to detail with the agent to ‘anticipate competition’ from United and Dortmund.

They further add the Serie A winners’ ‘good relations’ with Raiola can benefit the Old Lady in signing Haaland. There’s belief the operation can be closed for €30m, which Tuttosport believe is his release clause for January. 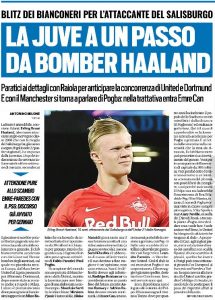 Tutto have gathered information from a ‘reliable source that’s worth trusting’ and they state Haaland is ‘one step away’ from Juventus.

If this report is true, it’ll be a blow for Solskjaer and Manchester United, who were keen on signing him in the winter market.