Since Olivier Giroud is out of contract this summer at Chelsea, many clubs have been circling around the Frenchman.

They did so in January too, but the Blues’ reluctance to lose the forward without a replacement coming in forced them to keep hold of him for the time being, fully aware they would probably see him leave on a free a few months later.

One of the clubs that came knocking during the winter window were Inter, and that’s where he’s ‘destined’ to end up, say Corriere dello Sport on Friday.

In their head, the deal taking Giroud to Italy seems all but done, as the player was ‘already convinced’ in January about the move.

Inter ‘do not want to miss’ the opportunity to sign the World Cup winner, who has ‘never stopped thinking’ about the Serie A side, ‘making it clear he is flattered and ready for the new adventure’. 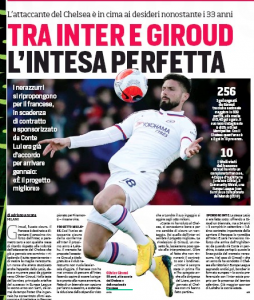 Furthermore, Antonio Conte’s desire to be reunited with Giroud is a big plus, as the Italian side seem intent on pleasing their star manager.

He was the one who pushed for Romelu Lukaku last summer (he got what he wanted), and that was an expensive transfer.

So when it comes to a free agent, Inter probably won’t even think twice if they get the chance.