A couple of days ago, Gazzetta dello Sport sucked us back into the AS Roma-Moise Kean scenario via an article looking at Edin Džeko’s future.

The Bosnian is an expensive asset to keep around, especially at 34 years of age, and with the club trying to reshuffle their squad with limited funds, there are various plans being studied for the future.

One of those could be to sell the target man, but even if he does stay, a backup will be needed, which is where the Everton youngster comes in.

Bought from Juventus last summer for around £25m, the forward has struggled to adapt to the Premier League, and while the arrival of Carlo Ancelotti on Merseyside did help a little bit, Kean never quite lit up the pitch consistently.

Now, a big decision lies ahead of Everton and their Italian manager: do they try and get their money back this summer, do they loan him out or do they give him an extra year to adapt to life in England?

If Corriere dello Sport are to be believed, it’s more the first two than the third, as the newspaper’s Friday edition claims ‘Ancelotti’s Everton seem open to listen to offers’. 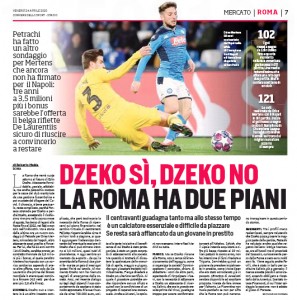 Whether they mean a loan or a full on transfer isn’t explained, but our guess is that if a club offers the Toffees enough for them to make their money back, their ears might perk up.

In the end, a lot could rest on Kean himself, and if he pushes for a move back to his home country, then they might not have a choice.

For the time being, however, that isn’t the case, and all we can do is keep seeing what the Italian media throw at us.