Michy Batshuayi has admitted he is ‘frustrated’ at Chelsea as he continues to play a bit-part role under manager Frank Lampard.

Batshuayi returned to Chelsea this summer after spending the latter half of last season on loan at Crystal Palace.

The short spell at Selhurst Park was Batshuayi’s third loan spell since arriving at Chelsea in 2016, with him also going on loan at Borussia Dortmund and Valencia in recent years.

His career at Stamford Bridge is yet to get going and does not look like doing so under Lampard, who has only handed him starts in the Carabao Cup so far this season.

Instead, Batshuayi finds himself playing the role of substitute, a situation he admits he is not enjoying.

“I am frustrated,” he admitted to Het Laatste Nieuws.

“Like any football player who has little time to play, he or she has the same frustration. You want to play football, but the decision is made by someone else.

“The number of minutes, the playing time, is determined by the ‘boss’. I just give the maximum and try to show the ‘boss’ that I am ready by also being efficient in training.”

The reason why Batshuayi finds himself playing a secondary role again this season is the form of striker Tammy Abraham.

Like the Belgian, Abraham returned to Chelsea this summer after spending last year on loan with Aston Villa.

That season in the Championship saw him score 26 goals in 42 games in all competitions for the Villains, helping them to secure promotion back to the Premier League.

He’s carried that form into this season, with ten goals in 17 games in all competitions and a place among the top scorers in the Premier League.

His form has made him first choice for Frank Lampard, but rather than be bitter, Batshuayi admits he has a good relationship with his fellow striker. 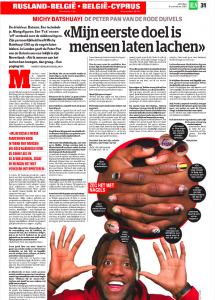 “Tammy is young and has qualities,” he added.

“We have a good bond. He is a very good competitor. We are constantly advising each other.

“I also agree well with Olivier Giroud. It is not always easy, but I can only keep working. Eventually you are rewarded for it. Crying does not pay off.”

Left-back ‘arouses the interest’ of both West Ham and Crystal Palace...

Manchester City player ‘brooding’ over transfer – And frustration grows over...

Club ‘convinced’ Tottenham will make ‘one last offensive’ for striker –...