Chelsea midfielder Jorginho believes he is now playing his best football after staying at the club to prove he ‘deserved’ to play in the Premier League.

The Italian midfielder arrived at Chelsea last summer in a big money move from Napoli alongside manager Maurizio Sarri.

Previous to his arrival at Stamford Bridge, he received plenty of attention, with it made clear he was the key to how Sarri wanted to play.

As a result, he became a lightning rod for the criticism of the Blues former boss, with many labelling him a flop and believing he was often the cause of Chelsea’s disappointing performances.

He is now flourishing under Frank Lampard and says there is nothing ‘accidental’ about that.

“It is all coming along very well, but there is nothing accidental,” he told Gazzetta Dello Sport.

“I wanted to stay in the most competitive championship in the world. Moving into a club like Chelsea and playing in the Premier League represents the pinnacle.

“I had promised myself not to miss this challenge. It wasn’t easy, but now I see the light.

“I was not welcomed well, and the beginning was tiring. When you move from one league to another, you need time to adapt. In football, unfortunately, we are impatient.

“I recognise myself as having never given up, for not letting myself go into despair. For this reason, now it is even better to live this dimension.

“I wanted to show that I deserved the Premier League and the Chelsea jersey.”

Key to Jorginho’s resurgence has been the arrival of Frank Lampard, who replaced Sarri as Chelsea manager this summer.

The former Blues midfielder has introduced a more attacking, free-flowing style than the Italian boss and is currently reaping the benefits with Chelsea flourishing.

Jorginho had work to do to convince the new boss he was worth keeping and says he achieved it by simply ‘working’.

“With Lampard, the agreement was born immediately, during the summer retreat,” he added.

“The risk that I could be considered a symbol of the previous coach was real, but Lampard wanted to judge with his eyes. 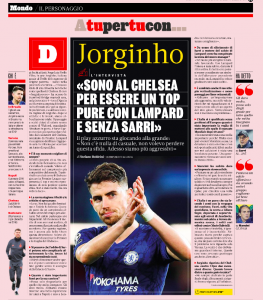 “We have a more aggressive approach, but only one aspect of my game was taken into account in the evaluations that concerned me.

“Vertical passing was never a problem.”