This week’s edition of SportBild explains the Gunners are joined by Chelsea and Manchester United in the chase for the defender.

The 22-year-old joined the Bundesliga side in January 2020 and his performances in his first full season at the club have drawn attention from England.

Bayer Leverkusen sporting director Simon Rolfes has also admitted the possibility of movements with regards to the club’s defensive players this summer.

It’s claimed Chelsea and Manchester United have made contact to ask about the centre-back.

Arsenal’s interest is mentioned, but it’s reported they have ‘little chance’ after finishing the 2020/21 season in the eighth spot. The option to join either Chelsea or United would be more interesting to the defender than moving to the Emirates.

The interest in the player would make it difficult for Bayer Leverkusen to retain Tapsoba, even though he signed a new contract until 2026, last December.

Thomas Tuchel wants to upgrade his side’s defence immediately, and the success in Europe only ‘strengthens his influence’ at Stamford Bridge. 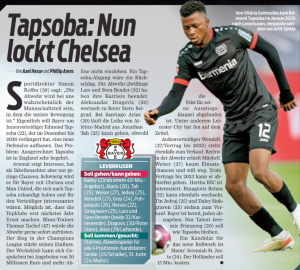 SportBild also state it’s possible for the likes of Chelsea and Manchester United to ‘not get serious’ to sign Tapsoba until the end of next season.

Chelsea and United have so far initiated contact and more developments could be expected depending on how things progress with regards to their other defensive targets.