Home Premier League Chelsea Chelsea have ‘made an offer’ for player – Man City edged away...
SHARE

Chelsea and Manchester City have made attempts to take Kingsley Coman away from Bayern Munich, according to reports.

The winger’s contract expires in 2023 and the Bundesliga winners have been working for more than a year to tie him down to a new deal. There seems to be a development in the renewal talks if today’s edition of L’Equipe is to be believed.

It’s claimed the 25-year-old’s renewal ‘never felt so close’ as he is ‘expected to extend the contract’ with the Bavarian club in the coming days. The duration of the new deal is not made clear, but they believe it would be for another three years.

The France international will get a pay rise and his new salary is expected to be between €18m and €20m per year. With this, he will move ahead of Leroy Sané [who collects €17m per year] in the Bayern earning list.

‘Several clubs had come forward’ to try and scupper things. 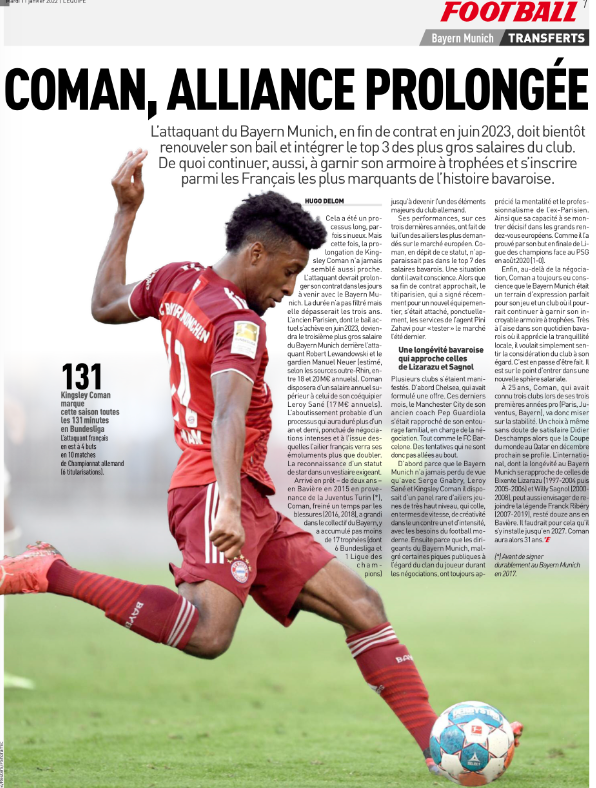 Regarding Chelsea, it’s claimed Thomas Tuchel’s side have ‘made an offer’ to sign the player.

Pep Guardiola managed Bayern for three seasons before joining the Citizens in 2016. Coman played under the former Barcelona boss during the latter’s final season in Germany.

L’Equipe explain that in recent months, Manchester City approached the attacker’s family, who are in charge of negotiations, to know the conditions to carry out his signing.

Although both Chelsea and City came forward for Coman, they will not be able to sign him because the Frenchman is now close to committing his long-term future to Bayern.