Home Europe Celtic will be ‘demanding’ this summer over player sale – ‘Many English...
SHARE

When a player scores 21 goals in 27 league games and adds another 12 assists to his tally, it doesn’t matter who you play for, clubs take interest.

That’s what’s happened with Odsonne Édouard at Celtic, who has been in great form for the Scottish side this season, and English clubs have taken notice.

It’s been talked about in England, and now it’s made its way to France, where L’Equipe specifically name Crystal Palace as an interested party.

They state ‘many English sides have positioned themselves’ for the U21 international, and then name drop the Eagles. 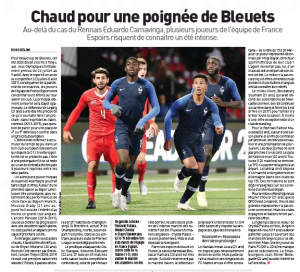 Why they do that isn’t said, although it’s easy to imagine Roy Hodgson’s side being the most insistent of the lot for the Celtic star, but it won’t be easy.

L’Equipe make it very clear those in charge at Parkhead will make sure to be ‘demanding’ when it comes to their prized asset, as our guess is they don’t particularly want to let him leave.

But, the French newspaper seem to think Édouard will somehow ‘profit from the intense striker market this summer’, but whether that is via a transfer or simply a new contract from Celtic, we’ll just have to wait and see.