After a disappointing start to the season, Celtic will probably be feeling a little sorry for themselves at this moment in time.

Things are not going right for them under Neill Lennon, and the pressure is on everyone at the club to turn things around and get back on track.

They have an opportunity to do that this week with an impressive performance in the Europa League, in which they will be taking on Sparta Prague in Group H.

The Scottish Premiership champions could undoubtedly do with a win, with them sitting bottom of the group after picking up a solitary point from their first three games.

And it seems that this could be the perfect time to face Sparta if the latest comments from the Czech Republic are anything to go by.

Idnes have covered the club today following their 4-2 defeat to SK Dynamo on Sunday, and it does not make for happy reading.

They say that Sparta ‘lags behind their rival in everything’ and the defeat, as well as the one to Viktoria Plzen before it, left a ‘sad impression’ and showed the side do not have a plan B in their play.

The 4-2 defeat is described as a ‘disgrace’, and while there are issues, particularly injury problems hampering the club, the lack of strength is a result of ‘naivety’. 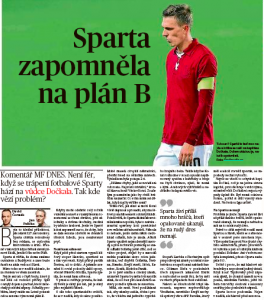 Indeed, the belief is that they ‘should be strong enough’ to handle a team at the bottom of the table, even without five or six players.

Idnes believe that the club ‘feeds too many players’ who ‘repeatedly show’ that they don’t and won’t have what it takes to wear the club’s red jersey.

Sparta are then accused of having ‘underestimated’ not only their opponents in this game but the situation before the season.

As a result, they are now suffering, something Celtic will be desperate to take advantage of when they meet on Thursday.