On Monday, the Catalan media have shown Ronald Koeman there’s only so much goodwill a European Cup winning goal and flirting with the Barcelona job can bring.

As well as Koeman being given a symbolic ‘yellow card’ for his poor period at Everton, Sport spit out what they really think when looking at the Arsenal result.

The 5-2 home defeat to Everton has ‘sentenced’ Koeman, presumably to the sack, and Sport say the ‘executioner’ arrived at Goodison Park in the shape of Arsene Wenger’s men.

The reaction of the Everton crowd is enough for Sport to believe Koeman is on the edge of being sacked, and it’s also a reputation issue for the Dutchman. 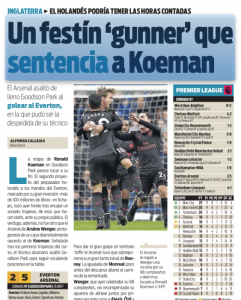 During the summer, Koeman openly flirted with the idea of managing Barcelona, with success at Southampton and a steady start at Everton seeing his stock rise to a point the Dutchman felt Barca wasn’t too far out of reach.

Failure at Everton, and to the extent it’s prolonged and embarrassing, would set that Barcelona dream back somewhat, and the reaction of the Catalan press surely makes that very clear.