The Portuguese press has mixed feelings about the possibility of Matteo Darmian’s arrival at Benfica.

Newspaper A Bola, who had already claimed there were contacts from the Eagles to sign the Manchester United fullback, managed to interview his agent Tulio Tinti, who didn’t really want to take a side regarding the transfer.

The representative claimed Darmian hasn’t been contacted by the Eagles yet, and doesn’t really have a reason to leave Manchester United right now.

Asked about the Benfica interest, Tinti said: “I didn’t hear anything. At this point, Darmian is at United and good right there. I don’t believe he’s leaving. No one called me from Benfica.” 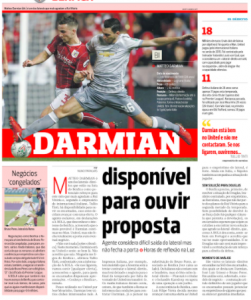 But he also claimed they will be available to talk: “If they call us, we’ll listen.”

A Bola claims Benfica’s idea is to sign Darmian on a loan deal until the end of the season, but there are a couple of reasons why the move is thought to be quite difficult.

Firstly because they are worried about the competition, as A Bola takes claims from the Italian press to show that the likes of Juventus and Roma are also interested in the player.

And there’s also the fact that the Barcelona loanee Douglas is still in Lisbon, and Benfica want to get rid of him before signing other players for the position. But as he doesn’t have many offers, things are complicated.

So even though Benfica seem to be interested in the Manchester United player, this is a transfer that sounds quite difficult for the January transfer window.

Club chief ‘hoping’ to pull off ‘difficult but not impossible’ deal...