When a new player goes to the Portuguese league, local newspapers try to find out everything about him. That’s when they try to get quotes from agents, former coaches or former teammates.

In the past few days, we’ve seen the agent of Chancel Mbemba pratically confirming his transfer from Newcastle United to FC Porto, saying that the clubs now need to get to a final agrement so the defender can complete his move.

Still looking for people to talk about the 23-year-old, local outlet O Jogo have now found a good source to talk about him, and that’s a Premier League player. Steven Defour, formerly of Porto and now at Burnley, was the one introducing Mbemba in today’s edition of the newspaper.

“Mbemba is a tough defender in individual marking. He’s a fast player, who has pass quality and who risks going out to play from the defence. He still has a good aerial game. He has talent and qualities to impose himself at FC Porto,” said Defour, who played alongside Mbemba at Anderlecht. 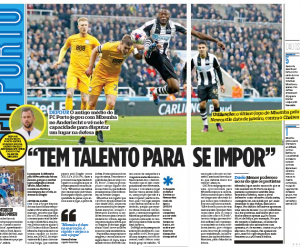 The outlet asked Defour why things didn’t go well for Mbemba at Newcastle: “I think he just couldn’t settle himself at Newcastle because they put him to play right-back often, a position that is not his. It’s a shame.

“He’s strong from the mental point of view and knows what he wants. He has the capacity to impose himself in a club like FC Porto.”

O Jogo’s story kind of ends up blaming Rafa Benitez for Mbemba’s failure at Newcastle, saying the manager is the one who chose not to play the defender in his right position.