Gazet van Antwerpen have an article in their Friday edition which details their local club’s return to preseason training next week, and what is expected of some players.

One of them is Ritchie De Laet, who moved to Antwerp on loan from Aston Villa in the January transfer. Whilst De Laet isn’t expected back at Villa until July, his loan contractually doesn’t end until June 30th.

That’s why the Belgian newspaper reports the player will be due to turn up at preseason training on Monday.

If true, it seems a strange situation, unless Antwerp still have plans to sign the player permanently.

In May it was reported in Belgium that Antwerp secured themselves a €2m buying clause from Aston Villa at the time of agreeing the loan, but it was always felt to be too much for the club.

Added to a transfer 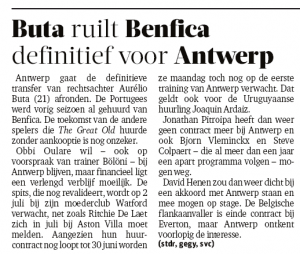 fee is De Laet’s wages and it was stated the fullback wasn’t willing to go down to a level Antwerp would pay.

There may well be talks ongoing in the background to get the cost down, but there’s no claim of that from Gazet van Antwerpen.