Despite not knowing where Mousa Dembélé will be playing next year, everything points towards the Belgium international not being there for Tottenham’s first game of the season in August.

The 30-year-old doesn’t appear to be interested in renewing his Spurs contract anytime soon, and with his current deal only keeping him around until 2019, this summer is the last for Daniel Levy to make some money from his star.

Inter in Italy have been after him for some time, while interest from China has been mentioned multiple times, but recent reports have suggested Napoli and Juventus have entered the fray.

Il Mattino on Friday explain the Belgian is simply an option for the Naples based side for now, with a meeting with his agents taking place over the past few days, but the feeling clubs have been getting is that Spurs would rather sell him to China, where they know clubs will pay their asking price. 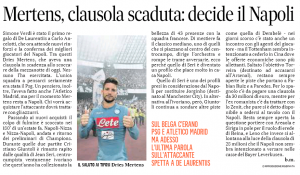 At this stage in his career, Dembélé knows he’s got one last chance at a nice contract, and heading east would certainly fulfil that requirement, yet the desire to remain in a more competitive league suggests a move to Italy might be his preference.

As we’ve pointed out a few times, as the Tottenham player is currently at the World Cup with his national team, it seems unlikely anything will happen in this dossier before July at the earliest.