Home Premier League Brighton Brighton and Southampton made approach for fullback – Offers still to be...
SHARE

Many clubs are said to be interested in the 21-year-old, and a couple of Italian sides seem to have engaged in talks for his signing. While Record‘s headline says Napoli are negotiating the transfer, O Jogo shows that Lazio are in the race as well.

Now there are also a few Premier League clubs who are involved in the battle too. And a couple of them are mentioned in both stories.

These are Brighton & Hove Albion and Southampton.

According to O Jogo, the Saints and Seagulls both made approaches for the signing. Neither of them made concrete proposals, and that’s why they seem to be behind in the race. 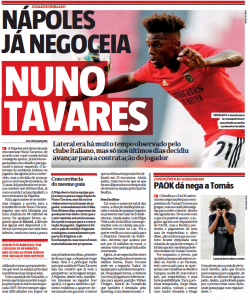 Brighton and Southampton are also named in Record’s story. The newspaper claims that the two clubs, along with Burnley and Newcastle, are those who could be an ‘alternative’ for Tavares in case he doesn’t move to Napoli.

It isn’t clear why the Saints and Seagulls haven’t bid for the player yet, but in case they decide to, it’s claimed that Benfica believe they can make around €15m with the transfer. A lot less than his release clause, which currently stands at €88m.