Max-Alain Gradel is close to the end of a ‘soap opera’ which has lasted four weeks, reports L’Equipe on Wednesday.

The French newspaper explains Bournemouth had been long against seeing the back of Gradel, despite interest from the player in a move and other clubs keen to snap him up.

Bournemouth have ‘finally’ agreed to the general idea of loaning Gradel, say L’Equipe, but they’re not happy with just any old loan.

Toulouse have put forward four different loan scenarios as they work to try and find something acceptable to the Premier League club. 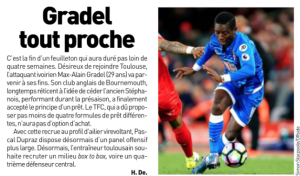 Toulouse will have no option to sign 29 year old Gradel permanently at the end of a season long loan, which is now edging closer to completion.

Gradel has a contract with Bournemouth until June 2020, and a good season at Toulouse could lead to a reasonably priced sale, but also gives the chance of a return to the English club.