A game between Chelsea and Manchester United has always been big enough for the Portuguese press to give coverage to it the day after.

And now that Bruno Fernandes is finally performing for the Red Devils following the big transfer saga, there’s an extra reason for his home country’s newspapers to follow the clash. Especially with him being chosen man of the match by the fans once again.

The Manchester United midfielder is obviously praised by all sports newspapers in Portugal today. Starting with A Bola, who had him on their front page, they highlight the fact that he’s ‘already’ made an assist against the Red Devils’ ‘favourite rival’.

Newspaper O Jogo says the midfielder ‘already shows what he’s made of’, and ‘was vital in the win at the Stamford Bridge’. Their headline says he’s ‘swept to all the corners’. 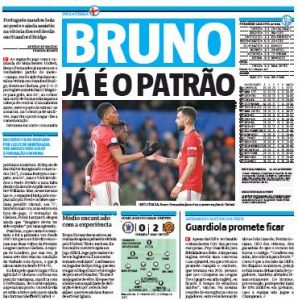 Meanwhile, outlet Record seems to be the one with the biggest excitement following his performance. They have a headline saying Bruno ‘is the boss already’.

They highlight the fact that he’s made an assist and say the post has ‘stopped’ him from celebrating what would be his first goal for the Red Devils.