As Portuguese newspaper Record today features a piece on the future of Paços Ferreira striker Douglas Tanque, who could leave the club this summer, they have something interesting to say about Birmingham City’s interest in the player.

According to the report, the Blues were the club who tried to sign the 27-year-old back in the January transfer window. The offer, however, wasn’t convincing enough for the Liga NOS side.

Paços Ferreira chose to hold the player back then, and apparently made the right choice, as he’s been the top scorer with nine goals this season. Now, however, it’s time to balance their accounts, and Tanque is the best shot they have.

Record says there are many clubs who’ve been interested in his signing, and even though Birmingham City are the only one named in the story, they still don’t make it clear if the Championship side are convinced of a new attempt in the summer. 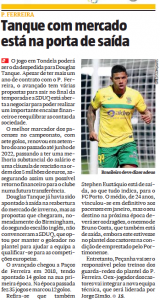 Douglas Tanque is protected with a release clause of only €5m, so even though Birmingham apparently couldn’t afford his signing in January, he’s certainly a target the club can dream of.

Record writes the next Paços Ferreira game ‘could be the farewell’ for Tanque at the club, as he’s ‘at the exit door’. So it’s safe to say the Portuguese club will be very open to negotiating his transfer this time.