Now that Sporting have won the Portuguese title, it’s time for them to work on keeping the big stars of their historic campaign.

The main name the club should worry about is Pedro Gonçalves, also known as Pote, who had an impressive first season with the Lions.

Newspaper Record writes today that the 22-year-old will ‘not leave’ the Lisbon side this summer, despite interest from big clubs such as Juventus, Liverpool and Manchester United.

Sporting are interested in rewarding the player with a new contract, raising his salary from €500k to €700k per season, and perhaps even changing his release clause from €60m to €80m.

Another sign that the Lions will not sell Pote is that they’re not working on buying the remaining 50% of his rights. The club spent €8.5m to sign him from Famalicão last summer, and it had previously been reported that in case of a sale this year, they’d negotiate to get the other half. According to Record, that’s not a concern at this time. 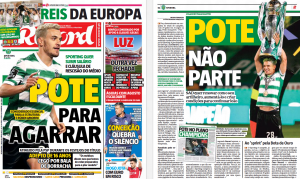 Pote had been linked to Liverpool and Manchester United earlier this season, even though the rumours had been quiet for a few months now.

At the start of February, it was said the Anfield and the Old Trafford side had both made ‘informal talks’ for the signing. It was later claimed the Red Devils would trigger the midfielder’s release clause, but that was actually a mistranslation made by the English media.

Pote has 20 goals and four assists in the Portuguese league this season so far. Quite impressive numbers for a midfielder, especially if we consider that no other Sporting player scored more than eight times this season.