Of interest to West Ham during the January transfer window, Nahitan Nández could have a big choice to make this summer.

The Cagliari star has a €36m release clause in his contract, and with both the Hammers and Leeds United reportedly circling, a move to the Premier League could be just around the corner.

The insertion of the Elland Road club this summer is relatively recent, although they were linked with him during his time at Boca Juniors, and it could be down to Marcelo Bielsa.

L’Unione Sarda have a look at the Uruguayan’s situation and explain Napoli, West Ham and Leeds are all looking at the 24-year-old.

Gennaro Gattuso is said to see himself in what the midfielder has to offer on a pitch, while the two Premier League clubs ‘like him a lot’. 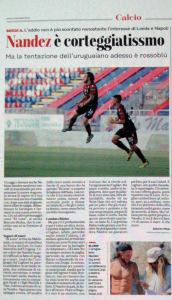 However, West Ham’s mention is rather fleeting, merely explaining they wanted him back in January, and give a few more column inches to Leeds.

They state Bielsa wants his side to be a ‘main protagonist’ in the Premier League next season and considers Nández ‘perfect’ for his team.

Cagliari are basically helpless in all this, because if a club triggers the €36m clause, they can’t stop him from leaving.