It’s only been a few days, and Newcastle United are already being linked with every man and his dog on the transfer market.

As we’ve said previously, it was bound to happen, but the reality of the takeover has sent certain members of the Italian member in something of a frenzy when it comes to the Magpies.

Thrown into the races for the likes of Marcelo Brozovic or even Federico Chiesa, Newcastle are now said to be a team to watch out for when it comes to Dusan Vlahovic.

The Serbian will not be renewing his contract at Fiorentina, and it’s clear he will be sold sooner rather than later, with teams such as Tottenham and Manchester City already after him.

While Fabio Paratici has said Spurs aren’t keen on Vlahovic, that hasn’t stopped agents interviewed by Tuttosport to mention them, and the St James’ Park residents, when it comes to who could buy the prolific goalscorer.

Italian intermediary Vincenzo Morabito was the first to mention the Magpies, saying: “I expect a change of team already in January: beware of Tottenham and even Newcastle. In Italy, I’d say more Milan than Juventus”. 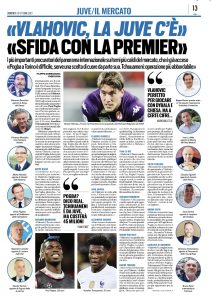 A bit later, Gianluca Di Domenico, the agent of Christian Fassnacht at Young Boys, added: “The English are rich and now, and now Newcastle will join the big teams. Commisso, the great businessman that he is, will do everything to sell the player in the Premier League”.

All this is somewhat backed up by local newspaper Il Tirreno, who hint that the Magpies are the latest ‘in chronological order’ to ‘follow him’ and his situation.

Whether Steve Bruce’s side do turn up remains to be seen, but they will likely have to be very convincing, since Vlahovic will likely want to make a step up in his career on a football level as well as earn more money.

It’s no slight to what the Magpies might achieve with their new riches down the line, but, right now, in January, joining a team who are currently 19th in the Premier League might not be what he’s looking for.