Dusan Tadic was the man targeted and there sounded some confidence in the claims.

Having moved from FC Twente to Southampton in 2014, Tadic had also spent time with Groningen, and was said to look kindly on a return to Dutch football.

Ajax would wait to see if Southampton were relegated and then use that as an opportunity to make a swoop. Around Europe there’s a belief clubs must hold a fire-sale when relegated but it’s often different in England, thanks in part to parachute payments.

That should be irrelevant, because barring snookers, Southampton look safe, but De Telegraaf still carry on their Tadic claims. 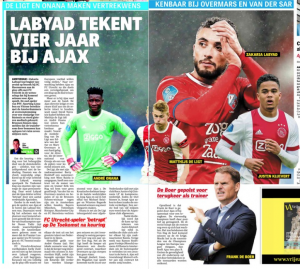 In their Wednesday edition it’s stated the Eredivisie side believe ‘more and more’ that a move for Tadic is realistic.

Southampton’s victory over Swansea City, and the probable implications, don’t get a mention.

Ajax are set for a round of transfer business this summer, like most years, and De Telegraaf present it as ambitious.

Presenting Tadic with wages that would please him and Southampton with a reasonable fee sounds unlikely, but there’s Dutch confidence suggesting otherwise.