Liam Henderson’s beaming face jumps out from page 27 of Tuttosport on Monday.

Moving from Celtic to Bari in the winter transfer window, the 21 year old has started 4 games, plus a further substitute appearance, and scored his first goal against Palermo at the weekend.

That leads Tuttosport to dub the former Celtic player ‘Braveheart Henderson’, in a nickname the player will hope sticks, if only because it will mean he’s doing well.

Bari are currently fourth in Serie B, a position which would currently see them face Palermo in a play-off for promotion to the Italian big time.

There’s every chance that after finding himself surplus to requirements under Brendan Rodgers, Henderson could be playing in Serie A next season, and it’s a story the Italian media are keen on. 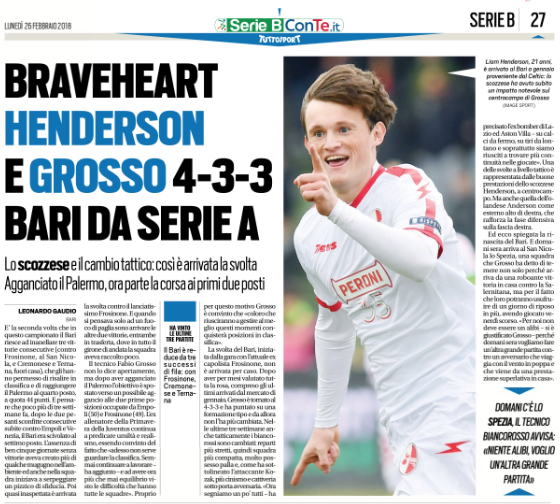 In recent years, there’s been a few Scottish youngsters leave British football for a try overseas. It didn’t work out so well for Oliver Burke at RB Leipzig, and Ryan Gauld finds himself way out of the team on loan from Sporting at Aves, so Henderson will certainly be looking for more success.

Should the former Celtic player achieve it then that can only be good for Scottish football and perhaps encourage other youngsters to give it a go elsewhere.

It’s not known if Celtic have a buyback clause on Henderson, or a percentage of any future Bari transfer profit, with the fee for the January move undisclosed.