Last Thursday saw the return of the Piotr Zielinski to Liverpool rumour, and boy, had we missed it.

The Poland international is enjoying a good run of form at Napoli, and that inevitably led to Jürgen Klopp’s interest in the 23-year-old being brought back, if not just to show how much money the Serie A side could make from a sale.

Calciomercato were the guilty party, explaining Liverpool were ‘preparing an assault’ for the summer, suggesting at least €35-40m would be needed to convince Aurelio de Laurentiis to part ways with his starlet.

However, Corriere dello Sport over the weekend go even further, strongly hinting Napoli would want his release clause triggered for an exit to be considered, and that stands at €65m. 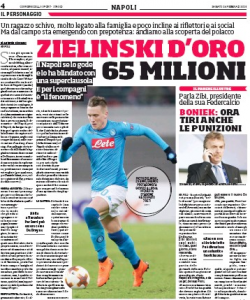 This falls in line with previous reports on the matter, although, back then, Il Mattino reported it as €70m.

In this day and age, €5m isn’t exactly a lot for Premier League clubs, and if Liverpool really want Zielinski, they’ll find the money somewhere.