Spanish newspaper AS, who focus more on Real Madrid, have decided to do some stirring at Barcelona. It’s a regular thing, the Catalan newspapers wind up Real Madrid, whilst AS and Marca do similar in reverse.

AS claim that Jordi Alba is considering his future, and has spoken to Chelsea and Manchester United players about a possible move to the Premier League.

Alba is said to feel somewhat unloved at Barcelona right now. Luis Enrique’s changes to the system haven’t been to his benefit, and AS point out he’s been on the bench more than would be expected. The left back has been playing recently, and Enrique’s choice of system will depart with the manager, so if his feelings are true, they may be slightly paranoid. 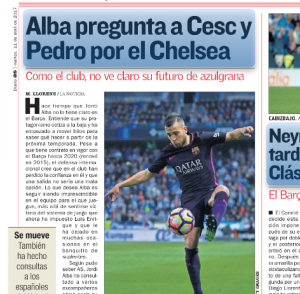 Nevertheless, AS say, according to their own information, Alba has spoken to Pedro and Cesc Fabregas at Chelsea, as well as the Spaniards at Manchester United. Ander Herrera, Juan Mata, and David De Gea haven’t been named individually, but that’s what AS are getting at.

Alba wants to know if the grass is greener, as he considers a potential summer exit. It’s far fetched, but then many actual transfers seem so at the outset.